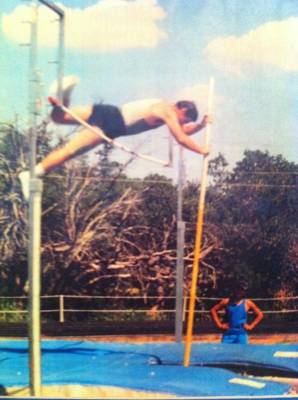 It was about two or three months before March 4, 1988 and I was about to turn 50 years of age. I was dangerously close to weighing 200 pounds and NOT enjoying the way I was feeling or looking. I suppose that on most Sunday mornings when I showed up for work, I looked okay for one of such an advanced year of 50! That is, if I was wearing one of my nice suits or sports jackets. I was Minister of Music at the Crestview Baptist Church in Georgetown, TX and had been there for 8 or 9 years at that time.

One day I was working in my office and looking over my mail and ran across an advertisement about a product called All Food Tabs. The advertisement featured the pictured a man, his name was Mr. Leon Bates of Sherman, TX, holding up a bottle of the tabs, and standing in his pants that was at least 5 or 6 sizes too large for him. He had used the product and lost over 100 lbs! He looked like he weighed about 150 lbs at the time the picture was taken. I sent in the form to order a bottle and when I got them, I began to use the product in the manner prescribed by the instructions for the product and was completely astonished by what happened over the next three weeks!

My wife was working at the Williamson County Health Department as one of the county health nurses at the time and after the first week of following the plan I went down to her office and weighed. I had lost 5 pounds! I was amazed. Week two: the same result, 5 more pounds. Week three, yep! Another 5 lbs. That’s 15 pounds and two full inches out of my waist in three weeks! I was so encouraged that it became a snap to keep it up and follow the plan to the tee. I replaced two full meals a day with six or seven of the tabs for each meal I skipped. I was able to take my caloric intake down from about 2500 to 3000 a day to 800 to 1000 total each day! Losing weight is no real secret for most folks who burn a normal number of calories daily. You simply have to burn more calories every day than you take in. Slowly over the past 8 to 10 years I had allowed myself to eat much more each day than I needed. Let me spend a few words telling you just how bad it had gotten. See if any of it is familiar to you.


Here is just one example: I still had two children living at home. One was attending College at our local University, Southwestern University in Georgetown. But our son, Scott who is now a chiropractor and professional nutritionist, was living at home and in his last few years of High School. When we had pancakes or French toast for his breakfast I or my wife would fix them for him. About half way through his first helping, he would think he wanted more and would ask me to fix them. But, by the time I finished up his reorder, always a very healthy serving, he would decide he really didn’t want them. I grew up in an age where it was almost a sin to throw food out. I would dutifully keep that from being necessary and eat his second helping after finishing mine. Then, believe it or not, at lunch because we lived so close to the church I served, I would go home and usually eat two rather large sandwiches. Then…. Many times, while out visiting, in the afternoon, I would grab myself a large coke and a snickers bar (600 or 700 calories), sometimes the big snickers bar. Then, on occasion, not always but way too often, I would have an opportunity to eat at the church for a wonderful potluck fellowship meal. If you are not familiar with this part of the church experience, allow me to fill you in a little. It is part of the eating problem for many folks, I’m afraid.

The finest cooks of the church prepare and place on the serving tables their very best dishes. Not every time, but too many times, I would eat a very large plate of the most delicious cuisine imaginable and then….. Go back for seconds! Yikes!!! Sometimes (most time) I would have two or three parts of the deserts available. That, probably would have equated to over 3000 calories on that kind of day easily. I admit I didn’t do that every day, of course, but I did it way too often for my own health and welfare. It’s surely as bad to overeat just it is to over drink to the point of being inebriated.


Because of that over indulgence and the fact that I WAS very active, i.e. playing tennis at least once a week with a fellow minister of music in Georgetown, golfing on a fairly regular basis and running up and down the halls of my church performing my regular duties each day. I was probably burning 2500 or so calories a day most days. After starting the TABS and becoming for the first time able to “cut back” a significant number of my calorie intake, the fat simply melted away. I went from a 39 inch waist size to a 34. My wife had to take up all my pants. It took me about six weeks to loose another 15 pounds, but it did happen. From 198 lbs down to about 170 which was my desired weight right on the button. This new found weight loss ushered into my life another curious turn and a phase to my life that gave me great benefit and one that fit in perfectly with my new found weight loss.


I had been an athlete of sorts all my life. I was fortunate enough to have been the Arkansas State Champion in the pole vault in Track and Field in my senior year in High School. Just as I turned 50 years of age all this weight loss process was beginning to unfold. I learned from a Service Club friend that he had been involved in the 1987 Texas Senior Games at Fair Park in Dallas. He had printed information about the games and the results of that past year’s individual events. It was fairly early in the history of the “Senior Games” at least as far as the state of Texas was concerned. There was only two cities hosting the games that I knew about in those early years. Dallas and Kerrville. My success in high school track was in the field events. My State Championship medal came in the Pole Vault in class 4A High School competition. When I found out that “old” folks still had an avenue to compete in Track and Field I prepared to become involved once again. I was really surprised to find out that “old people” pole vaulted. I entered the 1988 Senior Games in Dallas and principally because of my new found weight loss I was good to go. I went to the Georgetown high school track coach and asked if I could take a few turns at the pole vault pit. He looked at me like I was a little crazy but consented to give me a little help. They made me sign a waver stating that if I broke my neck, I would not sue them. He found an old Pacer vaulting pole that had been broken off about a two feet from the bottom. It was only about 12 feet long but it was sure long enough for my needs. I need to confess at this point in the story that most folks like me do NOT jump very high over anything. My new weight loss certainly helped me be competitive in my age group. If anyone (old or young) aspires to “jump” over something, they need to be lighter, not heaver. Pole Vaulting at 50 years of age might seem a little foolish, but I felt great and was already in pretty good shape. I’ve been jumping now for the past 22 years, and just recently participated in the Brazos Senior Games at Bryan High School placing first in the vault, second in the high jump, and first in the broad jump in the 70-74 year old age group.


I have a personal best jump of 10’ 6” which is certainly no where near a record on the National Level, but I have accomplished my goals being involved in the games. I have now ended my active competitive career in the games due to the near miss of twisting my knee last April at the Brazos Senior Games I mentioned. With my wife’s condition and my being the principal care giver, I simply can’t afford an injury that would prohibit my taking care of her. It’s been a great experience for me over these past years and a wonderful motivational tool to help me keep my weight down so I could jump. I’ve seen some wonderful older athletes do some amazing feats in their various events.


Back to the current Food Tab part of my story. Back in 1988 as my fellow church members began to see me lose the weight, many of them wanted to know what I was using and where I had gotten it. I told them and so many of my friends were wanting to try the tabs that I just had to become a distributor for the Ideal Meals “All Food Tabs” Company. About a month ago, we discovered that the Tabs had indeed made a comeback. And to its original formula as well as an even better marketing plan. Let me insert here a little about my take on what has to be one of the most important problems in American society today.


I’m very excited about being re-connected to the business for a number of reasons. It’s simply the best way to “skip” meals when it is necessary. Absolutely the least expensive way to pay for nutritional elements necessary for daily needs, and there is a very distinct possibility of making some extra income that can always come in handy especially in these days of economic downturn. It’s exciting to me to believe that one never knows when someone in your down line will introduce the product to someone that will really do it well. I guess it’s similar to the music teacher who introduces someone to the piano and that teacher never knows if he or she will become the next Mozart or at least a great music master. Very exciting to me.

It’s my hope and prayer that we can help many more people discover this wonderful product and that we’ll all be healthier and happier because of it.